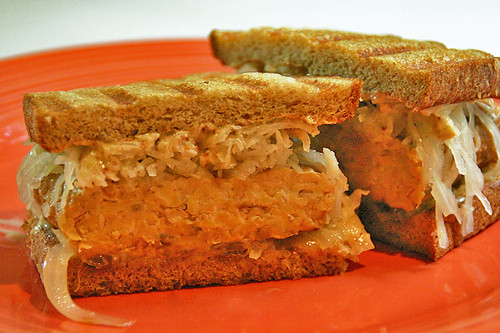 I made this following a recipe from The Candle Cafe Cookbook. Husband gave me the "This is really good". I agree it was yummy.

1. Preheat the oven to 350 or prepare a charcoal, gas, or stovetop grill.
2. In a small bowl, mix together the apple juice, maple syrup or agave nectar, shoyu or tamari soy sauce, garlic, and ginger. Place the tempeh in a baking dish, add the marinade, and let sit for 30 minutes.
3. Bake the tempeh for 30 minutes, or if using a grill, cook over medium-hot heat for 2 or 3 minutes a side, basting with the marinade.
4. To assemble each sandwich, place 2 squares of cooked tempeh on a slice of rye bread and top with sauerkraut and onions. Spread a tablespoon of Russian Dressing on the other slice of bread. Place on top of the sandwich and slice in half.

For the dressing:
In a small bowl, mix together the Vegan Mayo, ketchup, mustard, and onion until well combined. Chill for at least an hour before serving. The dressing will keep, covered, in the refrigerator, for up to 3 days.


Notes:
I used 1/2 of the ingredients and made 2 servings. I also baked the tempeh in the oven instead of the grill and it was awesome because all the marinade gets soaked up by the tempeh. I flipped the tempeh after 15 minutes of baking and baked the other side for 15 minutes so both sides got equal amount of marinade. I also used low sodium tamari soy sauce and added in salt to taste. The marinade is slightly sweet with low sodium soy sauce.
Instead of making the Russian Dressing, I just used veganaise and organic mustard with horseradish from Amy's Naturals. Also, I used whole wheat bread and toasted the bread with coconut oil.