My friend Penelope turned 4 on Saturday and I wanted to make her a special cake for a variety of reasons a) she just became a big sister last week and she is very proud of her new status b) i remember my own 4th bday and i wanted to help make hers memorable too c) stress factor (we live in  new orleans and she's been all over the place...just started her third school in two months, etc.)

so here's what i came up with: 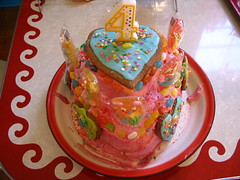 i made a chai double layer cake using some vintage heart shaped pans i thrifted awhile back.  the top heart cake is chocolate and is made from a jello mold that was my grandma's.  i made the gingerbread cookies from the PPK and the candies are carageenan lollies i found at my local asian  market.

This here cookie recipe calls for equal amounts of oleo and Crisco. What's oleo? Margarine? And will it make much difference if I sub both the oleo and Crisco with Earth Balance/Willow Run?

say i was looking for something to make for a brunch...
for possibly dozens of people (non-vegan)...
something that could sit out for a couple hours or easily be reheated if necessary...

what would i make?

I'm looking for a meatball recipe. I looked through the memories, and it kept saying features were unavaible. I found some on vebweb.com but they had little to no feedback.

Does anyone just have a recipe to create meatballs? My mom has a delicious sauce she crock pots and I want to make it vegan.

I've been wanting to make eggnog cookies for a while now and couldn't find a recipe- only muffins and breads. I threw this recipe together out of craving. They turned out wonderfully, I just had to keep an eye on the oven to accomodate for my experimenting.

Amounts are a bit estimated, as the original recipe didn't call for soymilk at all (I substituted soynog for parts of each liquid to my taste) and I eyeballed some things. I was fairly generous with the cloves as it's a very eggnoggy spice (also, I didn't want to use too much liquid and throw off the recipe entirely). This was sort of trial-and-error; I had to add more flour when I added the soymilk mixtures because it was way too runny, et cetera. Like I said, you may need to play around with this- but hey, I did, and I'm tempted to eat all of them in a single sitting.

I made two batches: I didn't use chocolate chips in the first- it was also much thinner and had to bake for longer than the second batch, in which I did use chocolate chips and added more oats. The first batch are more like eggnog oatmeal cookies- monstrous in diameter in comparison to most other cookies I've made, thin, and crispy on the edges but moist in the middle. The second batch are more like... oatnog chocolate chip clusters of love. Anyway, play around if you'd like and enjoy!

These were great, but my waffle iron isn't so great.
( Collapse )

In the memories of vegantestkitchn there is a recipe for pumpkin seed crusted tofu that I think is so good. I'm making it as part of our Thanksgiving menu, but was hoping for some marinade ideas. What would be good with this? I looked in the memories, but nothing really caught my eye. Well, there was one that looked kind of interesting with red wine in it, but I'm not sure how I feel about that, yet. If I put it in to marinade tomorrow (Tuesday) or the next day, would the wine flavor be too overwhelming by Saturday? I'm not even sure I want to use that one, so any ideas are really appreciated! Thanks!