again with the freaking raspberries. 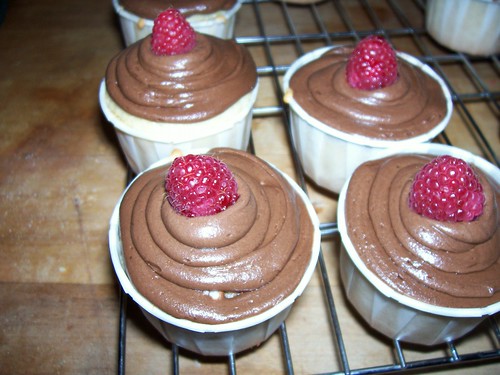 (coconut cupcakes, raspberry chocolate frosting, and of course a raspberry on top)


( Collapse )
I'm making Vegan Planet's Black Bean and Sweet Potato Enchiladas for ... a late lunch. Except I realized after I started that I don't have any chili powder left. (drat!) What can I replace a tbsp of chili powder with? red pepper flakes? I few drops of hot pepper sauce? (those will both make it hotter, I realize). Annnnyything? Should I substitute some cumin, or will that make it nasty?

Ok. So what's the difference between shortening (a la Crisco) vs. vegan margarine (a la Earth Balance). I would assume a flavor difference, but chemically? (In other words, can I use shortening to make valentines sugar cookies?)

I tried to make truffles for my boyfriend for Valentine's day following this recipe, but either my food processor is not tough enough to make this a smooth mixture, I suck at measurements, or that recipe is awful, because I currently have two bowls (I made one with raspberries, one with cherries) of chocolatey, slightly lumpy-with-walnuts, fruity goo in my refrigerator. They've been there for about 5 hours but don't seem to be getting any closer to truffle consistency. It is rather tasty, and I used up a lot of ingredients in it, so I would like to come up with some use for it, preferably a use that is tasty and presentable enough for a Valentine's day/2 year anniversary gift.

My dad suggested maybe using it as icing for some kind of cookie, and I was thinking maybe sandwich cookies or attempting to make the mixtures into brownies somehow, but I'm not sure what would work best.

Over the last day I've worked on making my seitan "roast beast" recipe. I changed it up a little by running the gluten mixture through the dough setting on my bread machine twice, and by simmering it on high in my crockpot for about 12 hours. It really did make quite a different in how "meaty" the end result was and frankly, after tasting it, I don't know why anyone WOULD choose real roast beef anymore.

To go along with this I made a batch of roasted potatoes, carrots and parsnips. I peeled and chopped everything, and then put about 1 1/2 cups of the cooking broth from the seitan in a roasting pan and tossed just the potatoes in it. I baked the potatoes at 375 for about 45 minutes, stirring now and then, before adding the carrots and parsnips, and then I cooked it for another 45 minutes, until everything was tender and flavourful.

About 20 minutes before the veggies were due to be finished I upped the oven temp to 425 and put a cast iron skillet in the oven to heat. After ten minutes, I added about 4 tbsp of canola oil and returned it to the oven to heat for five more minutes. The trick with yorkshire pudding is to make sure the oil and pan you're cooking it in is hot, hot, hot before you add the batter.

Here is the recipe for the batter:

Blend the tofu and the soy milk together in your food processor or blender until smooth.

In a mixing bowl, stir together the flour, baking powder and salt.

When you put the oil in the skillet and return it to the oven, quickly mix the wet ingredients into the dry, but don't overmix! Once the oil is hot, take the skillet out of the oven and quickly add the batter; but BE CAREFUL BECAUSE IT WILL SPATTER! Try to spread it out to the edges of the pan but don't be too fussy because you don't want it to cool too much. Return the skillet to the oven, on the MIDDLE RACK, and let it bake at 425 for 18 - 20 minutes, or until golden and puffy. Remove from the oven, slice into 4 to 6 wedges, and serve with your roast and gravy.

Alternately, you can make cute little individual yorkshire puddings in muffin tins using the same method but I thought that would be a bit too tricky/fiddly to manage on my first try. I'll give it a shot next time.

This meal made me feel all kinds of feelings, because it was one my mom used to make for us on Sunday nights when I was growing up, before we all became vegetarians. I never thought I'd get to have yorkshire pudding again!

x-posted to my recipe journal.