Maybe I am just imagining that what I just made is Lebanese because I am still mourning the loss of my favorite San Diego Lebanese joint, which has turned into another taco stand :( I had something that was SO good there and I can't remember the name (or if it had chicken even, since I used to eat meat when I went there) but I tried my best.

At any rate, it was mmm-mmm-good. I just threw in whatever I had on hand - you definitely do not even need half the ingredients I used, but I put all of the ideas out there so you can be as creative as you want.

The recipe I wrote up is too long to include here, but here's the main gist of it:( Collapse )

This one is a favorite of mine. I've been craving it like MAD since I've been pregnant, which could be because it's VERY healthy and full of nutrients. It has lots of flavor and the kids like it. I made it tonight and my nine year old son asked if he could have it in his lunch tomorrow, which works out great because this is one of those soups that tastes even better the next day. Also, for those of you with older kids, this is a great recipe for them to help with. My nine year-old cuts all the veggies for me. He will also stand on a stool and stir the pot once we start cooking it, adding the broth, tomatoes, etc. when needed. The recipe where this originated was from a children's vegetarian cookbook of his. We've changed the original recipe quite a bit, but it's still a fun one for him to help with.

SO I posted a while ago asking if there was a way to get a ham like flavor for a ham and bean soup. someone suggested liquid smoke and I tried that and it was a complete disaster (probably because I did not know how to use it right and put in way too much, or too little or something). So does anyone have a recipe for a ham and bean soup using liquid smoke for the ham flavoring (I looked for the vegan ham flavoring in stores but wasn't able to find it...but i haven't looked for it since moving. anyone know of somewhere in seattle to get it? i was told in the mexican food part of the grocery store.....)? Thanks for your help!!

I come from a family that is Irish on one side and Russian on the other, so I was raised in a tradition where many dishes are actually leftovers of other dishes, thrown together. For instance, stew was made from the leftovers of Sunday's roast. And casseroles were made from leftovers of brunches or what not.

Since I became a strict-vegetarian-working-towards-veganism, I've been experimenting with Middle Eastern-style dishes, but I kinda missed my Hodgepodge Dinners.

I put one together last night with success. I used the following leftovers I had sitting in tupperwares:

I mixed them together in a Pyrex bowl, poured some tomato soup over the top, and covered the mixture with some vegan cheese slices. Then I baked it in the oven at 350 until the cheese melted and the soup was bubbling up around the edges - about 10 minutes.

I thought it was a good-tasting comfort food.

Oh, and: does anyone else have any Hodgpodge dinners they'd like to share with me? Does anyone know of a vegan cheese that isn't so rubber-y?

I just got a package of teff the other day. I've experimented with it a little, but I have two questions:

What kind of consistency is the teff supposed to get to with the 4:1 water/teff ratio? It seems to vary a bit.

Anyone have any good teff recipes? Maybe this would be a good reason to cook Etheopian :o).

maybe it's just my munchies, but what would happen if i put cake batter in a waffle iron? would i get chocolate cake waffles? would this work? (is this a really stupid question? haha) this seriously sounds like a great idea. 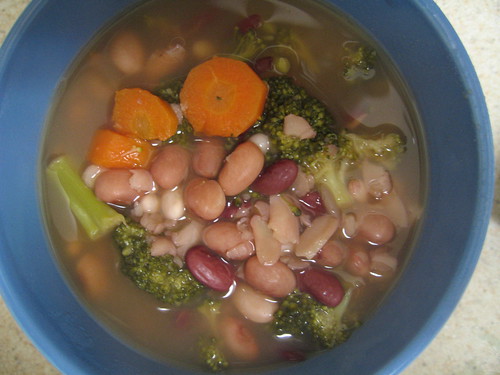 Thank you to everyone who replied to my earlier post. I made the soup with a few drops of liquid smoke (although I shall have to try the other suggestions soon...) and it was delicious! Just put in a lot of dried beans I had, some vegetables, onion and garlic, and some vegetable bullion with the liquid smoke and voila! Delicious!
Recipe: Mango Salsa Wontons (makes 24)

Preparation
Coat mini-muffin pans with cooking spray and line the molds with wonton sheets. Bake at 350°F for 9 to 12 minutes or until golden brown. Cool. Combine remaining ingredients plus salt and pepper to taste. Fill each wonton with salsa and serve.
Collapse