As we take over the world, one cupcake at a time...

The body of these cupcakes was wacky cake, because VCTOTW was not immediately at hand and I was short on time so wanted to go with something tried and true. I brought over my copy while the they were cooking and after pondering frosting options, went with the Peanut Buttercream.

The result was visually so tan that I felt it needed more embellishment, so I added the streaks of chocolate syrup and a peanut to the top of each. I like when a garnish reflects what's inside. (I'd initially planned to pipe the frosting, but I chose the wrong tip and changing out would have been a mess. I also realized at that point that I'd made two batches of cupcakes but only a single (albeit large) batch of frosting, and my piping plan involved way more frosting than I had available. I was happy with the end result and they went over well at the event for which I made 'em.)

I highly recommend Vegan Cupcakes Take Over the World. Not only are the recipes great and the authors wonderful people, but it's a beautiful book with fabulous pictures, so even those who don't actually cook can enjoy it.

These lovely, light biscuits [cookies] are lovely sprinkled with a little icing [confectioner's] sugar and/or part dipped in melted chocolate.  The shortbread's also a rather nice topping for Christmas mince pies.

I'll take a photo of the next batch, so consider this line a placeholder.

i made cupcakes today and they came out too dense instead of springe-y like cupcakes and cakes usually are. it was a pretty basic recipe calling for flour, oil, baking powder, baking soda, salt, vanilla extract, sugar, and rice milk. i combined the ingredients exactly as directed and mixed them until smooth just as the recipe told me to. any one know what it is that makes cupcakes and cakes have that springe-y, soft, and airy texture? i have no idea where i went wrong... 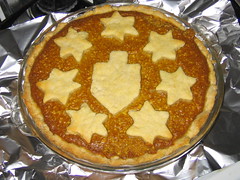 I made a yummy pumpkin pie with ginger sugar and an easy, no-chill crust (and used the leftover crust to make cutouts for the top). It turned out quite well.