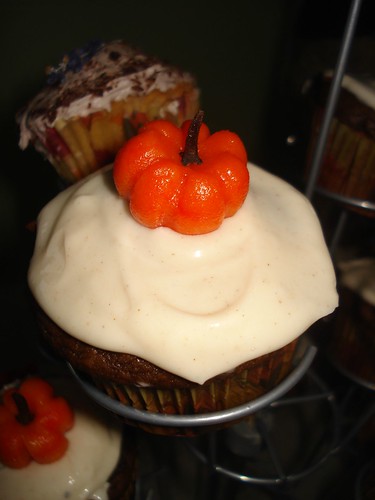 I'm making a dinner for about 15 people on Tuesday night. Most of them are omnivorous guys from the deep south, which is making me slightly twitchy. However, they're nice guys and eat their veggies, so they're probably not going to be a hostile crowd as long as I don't go too far into the realm of acquired vegan tastes.

I'm thinking of making some sort of pasta with fall veggies, since everyone likes pasta. Butternut squash will probably be involved somehow, since I've been dying to try something like this since I had this excellent spicy squash pasta a few weeks ago. For dessert, I'm making apple cider cupcakes.

However, I'm having difficulty coming up with good sides that aren't incredibly starchy or too overtly vegan to go with this. Any suggestions? Also, if anyone has tips for cooking for a group this size, I'd appreciate them.

Thanks!
Hi, I am new to this community. Four months ago I changed from being an omnivore to a vegan. So far I can cook very well with tofu, but I am starting to get tired of it. When I made seitan the texture was good, but there was a strong taste of wheat to it. Can any one help me with fixing the taste of it? What am I doing wrong?
The batch I made I added ¼ soy sauce, a few drops of liquid smoke, some pepper and chili spices, garlic powder and onion powder and cup of water.

I made tea cookies this afternoon with lavender and lemon grass. They're awesome!
I actually combined two recipes I found on-line and made some adjustments.

Stir together flour, baking powder and a pinch of salt. Set aside.

Melt the butter, but be careful not to overheat it, then mix in the sugar. Stir in the Ener_G and apple sauce, and blend into the butter and sugar. Mix in the lavender and lemongrass and then the flour. Drop batter by teaspoonfuls onto cookie sheets. Bake 15 to 20 minutes, or until golden. Bake for about 10 minutes or until golden-brown. Serve with hot tea.

I milled the lemon grass and lavender to make it smoother.
Collapse