I've never done this before and the instructions were kind of confusing. Here's what I got:

3. Wrap in foil or plastic bag and let sit until cool enough to handle (steam helps the skin slip off easier).

4. Slip the skin off and slice.

Am I missing anything?

photos and instructions on veganyumyum

Well, I bought a slow cooker years back but it has been sitting at a friend's house for some time. Yesterday, I brought the box back, so now I'm ready to go. You see, these days I'm often too tired and flaked out to cook when I get home from work, so I end up snacking and eating lots of bread, which is hardly cook. I want to put my food in the slow cooker before I leave work and come home to find it done and ready to eat!

However, the problem; I have a slow cooker recipe book. It isn't veg*n (tho it has a fair few recipes which are), but this isn't so much of a problem in itself. The problem is that many of the best recipes say things like, "Put in first batch of ingredients. Cook for 3 hours. Add next batch. Cook for another 5 hours.', which is pretty useless for me as I can't come home from work at lunchtime to fiddle with my slow cooker! What I'm looking for are simple, tasty and reasonably healthy one-pot meals. I don't mind recipes where I have to fry onions & spices for 10 minutes before I start, or soak or boil beans before I start cooking them - that's fine.

So, if you lovely people have some nice vegan slow-cooker recipes which don't involve adding anything halfway through cooking (or mushrooms! ew!), I'd love to hear them. I'd also love to hear people's input about slow-cooking specifically vegan products, like soy chunks, tofu, seitan, etc. How easy is it to swap vegan proteins for meat in a meat slow-cooker recipe? I'd assume with something like soy chunks, they'd need pre-soaking and a quick boil, but if any of you have any experience with using a slow cooker, I'd really like to hear it.

This is probably the first time since I got VCTOTW that I've made cupcakes without using a recipe from the book. Feels blasphemic, almost. The drizzles are melted [vegan, obviously] white chocolate that I got for Christmas and have been jealously hoarding since, cause I found out after the cupcakes were in the oven that my brother had eaten all the dark chocolate chips in the house D=. Recipe below the cut, it's quite long. 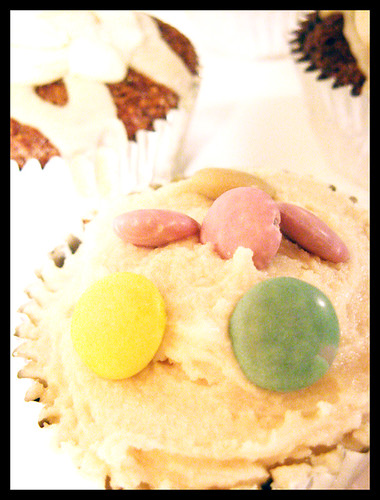 OK, here's a challenge.
I spent a semester studying in Hungary, and, of everything I ate there, I really miss these little coconut pastries (aka kokuszgolyok) that I had with my daily cup of coffee. They're dense, round balls with a very faint taste of rum. The only recipes I can find are in Hungarian, and it's been 14 months since I left the country (not to mention that a semester wasn't long enough for me to become fluent), so... can anyone help? I wasn't vegan then, but I've been trying to do so for the past few months, especially when baking.

I just got VCTOtW over the weekend, and made these Tiramisu Cupcakes for a family dinner party! I am the only vegan, let alone veggie inclined person in my family! hehe I didn't tell anyone they were vegan, and I got all raves! The only slightly negative comment I got was from my sister who said the icing tasted too "cream cheesy". LOL Later this week I'm planning to make the Lentils and Rice with Carmalized Onions and Spiced Pita Crisps from Veganomicon, but I've got a problem. The instructions call for ground cloves, but the ingredient list doesn't list them. I've tried searching for a corrections/omissions webiste (both through searching and at the PPK), but I've had no luck. Does anyone know how much ground clove I'm supposed to add?