(the truffle recipe is the infamous recipezaar recipe that uses cashews)
http://www.recipezaar.com/Vegan-Truffles-33995 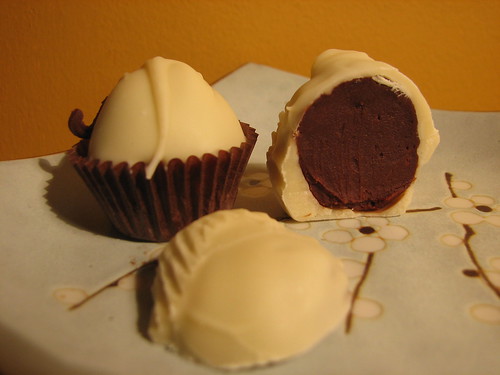 Does anyone have a good egg free knodel recipe? TIA

The lovely Rachel Allen was making these bars on her show and they just looked so delish I had to make them to wow my family at Xmas. So, naturally, when under pressure, the whole things failed b/c I didn't think it through.

( Collapse )
Anyway, the thing was a disaster. The base was rock hard and the caramel layer was way way way too liquidy. Added arrow root to no avail, and in the end I chucked in all of the chocolate of the top layer in an attempt to thicken it, which helped a bit, but not enough. Had I had more chocolate, I would've put that in. But I was out of chocolate and out of time, so I chucked the whole thing aside.
Now my question is: what can I still do with this mixture? I have a saucepan filled with a gooey chocolatey goo, being the ingredients of caramel layer + 200 gr of dark choc. It's really really extremely sweet. I was thinking if maybe I can throw in some flour & stuff, maybe I can still turn it in to something worth eating?
I'm sure one of you has an eye for these kinds of things. Help?
Thanks in advance!

So I'm home for my winter break and I bought tons of winter vegetables to keep at my mom's house. However, her oven isn't working and I don't know how to cook these vegetables other than stuffing and baking them.

I specifically want to find a way to cook acorn squash and spaghetti squash using the stove/microwave. Any ideas?
Collapse