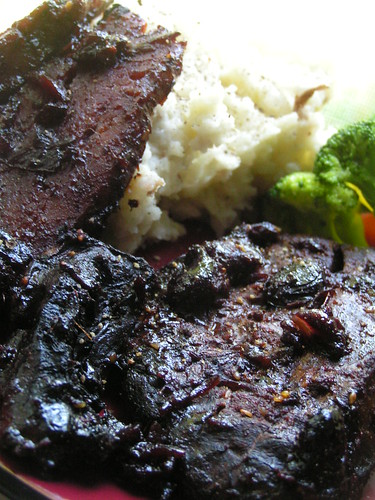 This week's recipe, originally from Guy Fieri,, for sppicy cherry ribs. First off, this sauce is amazingly complex, like you can almost feel/taste it's flavour changing in your mouth. Not at all what I would describe as a BBQ sauce, but yet still rich, smoky, sweet, spicy, savoury blending all at once. Full details on my blog: www.notjustgreens.blogspot.com plus more photos!

hello vegancooking, i need your assistance. my boyfriend and i have had a rough few months - i've been working two jobs and had zero free time, he's been getting slammed at work by a supervisor that has a personal grudge against him and wants him fired. things are finally settled down now, and i want to celebrate by cooking him a fancy candlelit dinner. we tend to eat italian, middle eastern, indian, and thai food, and i like cooking all of those; i've also had some luck cooking east african food, and he is a fan of caribbean food, although i've never tried cooking that. he's pretty open to trying whatever (except broccoli - the fool). however, i face a few challenges:

1) no soy for me. i'll do a splash of soy sauce, although i really shouldn't, but anything else is strictly off-limits. no soymilk, tofu, tempeh (*sob*), etc.

2) he is convinced that seitan is the antichrist. it seems a vegan friend fed him some in his youth and it didn't go well. i don't see how this is possible, but he swears it happened.

3) my presentation is truly terrible. i make delicious food, but it's all of the "i put all this shit in a pot for you, don't look at it, i swear it tastes good" variety. i want this dinner to look pretty, dammit.

4) i want to prove to him that vegan food can be hearty and sustaining. he's talked about going vegan, but he has this idea that it's bad for his blood sugar (he's hypoglycemic). he mostly eats vegan with me, mostly at restaurants where we share dishes. vegan proteins in restaurants are usually off-limits to me, so we generally end up eating carby things. unfortunately, when he loads up on carbs he crashes pretty quickly, which is where he gets the idea that veganism is bad for him. really it's just that he needs to eat lower on the glycemic index than i do.

thank you in advance for your help!
Collapse