I realized that I’ve done a lot of baking and cooking recently and haven’t put it on LJ in picture form! Here’s two things I’ve made rather recently: 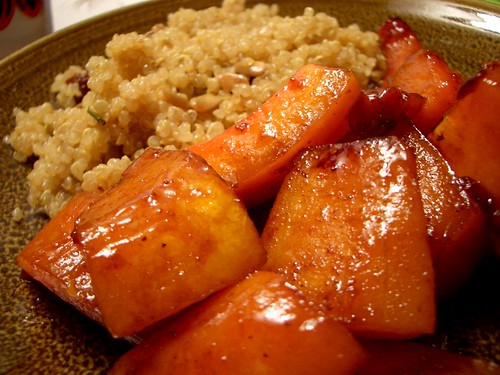 For the quinoa, follow the instructions on whatever quinoa you are using as to how to cook it (usually it is a 1:2 quinoa:water ratio). Into the water after it is boiling, add all the ingredients and cover after reducing temperature. I added rosemary, seasalt, olive oil, and raisins directly into the water so it cooked *into* the quinoa. You can add them after, though, too! The taste just may not be as infused. There is no measurement, it is simply to-taste.

For the squash,
MMMMMMMM!!!!

Bi-crust Rapple Pie (we named it)

filled with fresh honeycrisp apples, hand-picked (by us!) raspberries, and apple butter, with a touch of ground clove.
For the bottom crust:

1.preheat oven to 425F
2.food proccess or smash about 20 gingersnap cookies and a few tbsp of "butter"
3.press mixture into a pie pan4.bake for about 5 minutes until it's "together" and remove from oven.

5. Start on filling.
Apple Raspberry Filling
-1 Tbsp of Vegetable or Canola oil to cook down the fruit
- 4 chopped HoneyCrisp Apples (we left the skin on for more fiber)
-1/4 cup of apple butter
-Dash of cinnamon and nutmeg
-1/2 pint of fresh raspberries (or frozen)
6.Mix these ingredients together in a pot over medium heat until SLIGHTLY tender and warm; remove from heat.
7. Make top crust.

Butter-Flake Crust Top
(For this, we seriously just estimated until the consistency was correct. Salt is important. Lots of "butter" is needed for a flaky top!)
-Wheat flour
-Salt
-Butter
-Cloves

8.Roll out the mixture and cut "strips" with a knife.
9.Spoon the fruit mixture into the gingersnap crust, and then and lay the butter-flake crust strips on top however you like! If you're creative, cute little shapes can be cut, too...we just wanted to make it look as country as possible, haha.
10.Bake at 400-425F for anywhere between 35-45 minutes. Remove from oven when top crust is slightly browned!