I made gluten free vegan nachos for tea last night :) as well as the bean mix I made the corn chips, the 'cheese' and the sour 'cream' myself :) 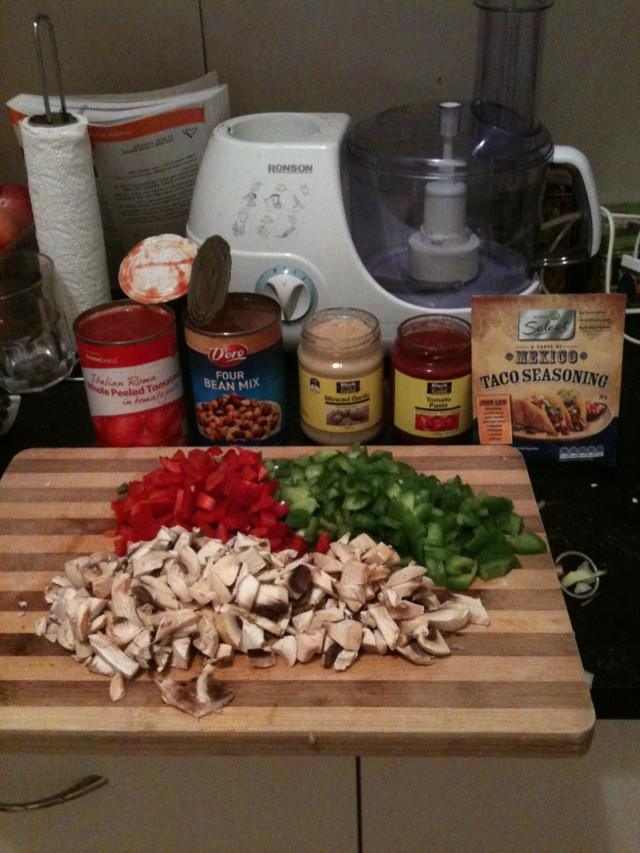 Very simple veg & bean recipe. I sautéed the onion in water to avoid using oil, after it was softened & most of the water had evaporated I added the garlic & tomato paste & cooked for a few minutes. Then I added the veggies, stirred those through, then added the can of tomatoes and filled the tomato can half full of water with the taco seasoning which I mixed together and added to the pan. Lastly added the (drained & rinsed) beans. Simmered for about 20-30 mins until thick & veggies were tender. 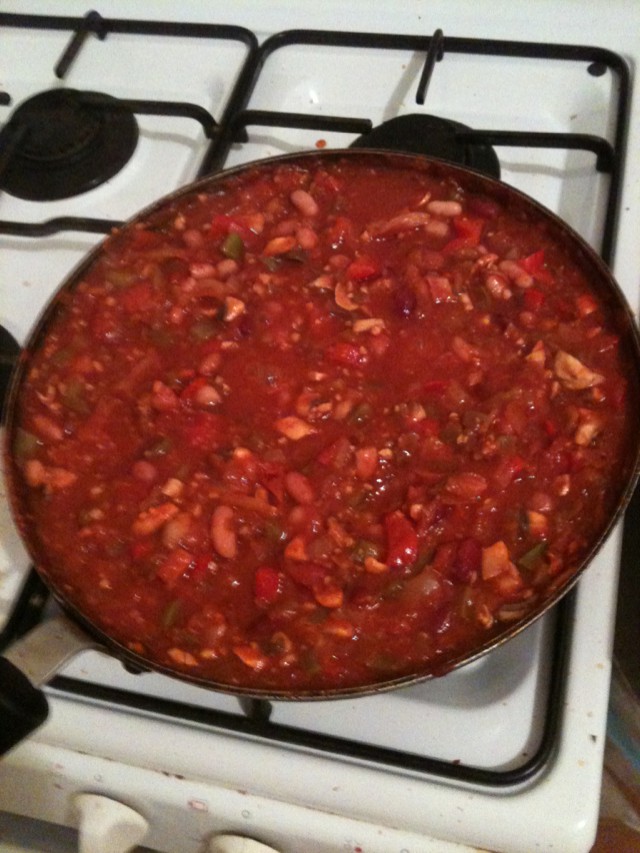 For the corn chips I did two different types. The simplest ones were just a ratio of 2:1 stone ground corn (masa) & hot water (as if making tortillas). I may have added a splash more of water & masa until I got a desired doughy consistency, similar to bread dough. Then I rolled it out as thin as I could on a sheet of aluminum foil & sliced triangle shapes in to the dough. I didn't grease the foil & the chips didn't stick so that was good!
The other batch was 1 cup stone ground corn & 1 cup polenta with 1/8 cup olive oil & 1 tsp baking powder plus enough water (room temp not warm) to get it moist & doughy. This mix was quite crumbly due to the polenta. I took little balls and flattened them on my palm, then placed them on to a greased sheet of aluminum foil where I flattened them down a bit more, trying to get them as thin as possible without cracking and keeping a general circle shape.
Both types went in the oven at 200 degrees (celsius) for approx 25 mins, until they were crispy. Salt or herbs could of been added but I elected to keep mine plain, they were lovely & crisp & both tasted good! The masa/water ones were completely oil free, too :) the polenta ones had a nice texture and could potentially be made sans oil. 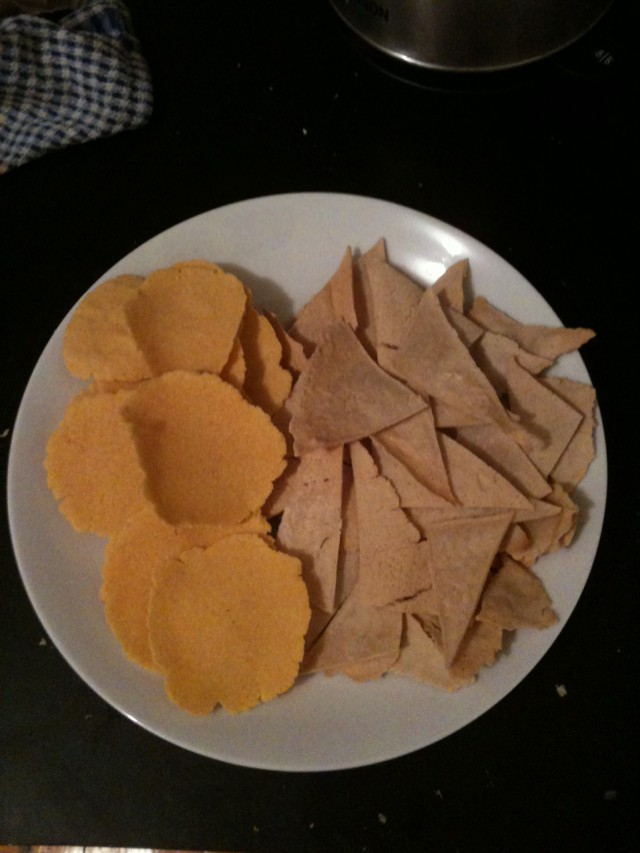 The vegan cheese I had already made the day before:
2/3 cup raw cashews
1 medium red capsicum, ribbed seeded & diced
2 TB tahini
2 TB lemon juice
3 TB nutritional yeast (to taste)
1 tsp smoked paprika
1 tsp onion powder
1 tsp garlic powder
1 tsp pink Himalayan salt
1 TB mustard (I used american)
Whizz all ingredients up in a food processor.
Then mix up 2 TB agar powder with 1 & 1/2 cups water in a small pan, stir over medium heat until it becomes thick (couple minutes). Add agar to food processor, whizz it all up together then pour in a container & leave in fridge to set. 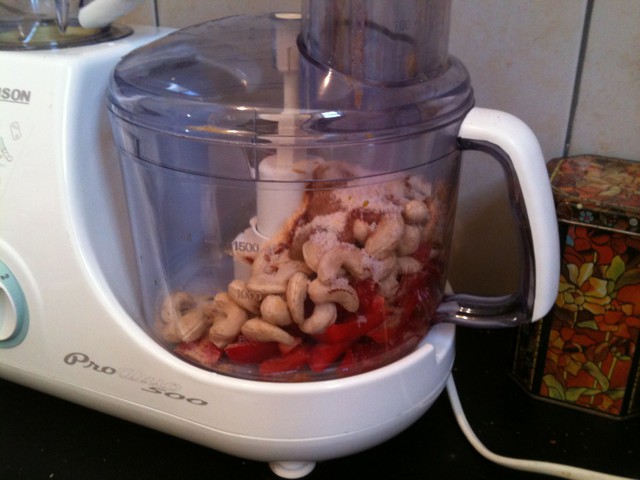 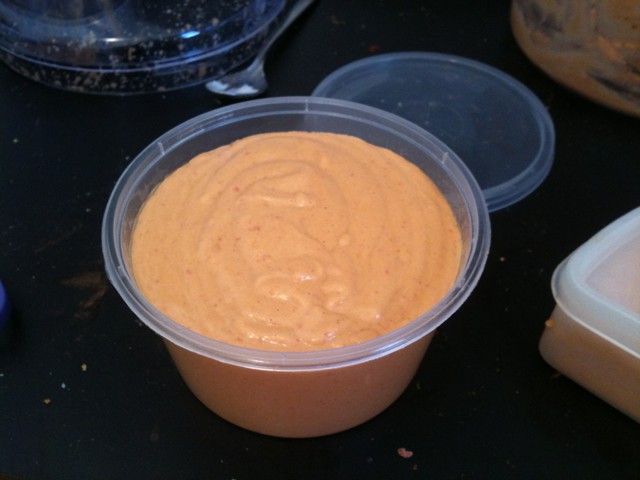 For the sour cream I mixed the following up in a blender:
300g pack of firm silken tofu
1/4 cup soy milk
3 TB lemon juice
1 TB nutritional yeast
plus some salt and a bit of unbleached raw sugar (I forget exact quantities but was adjusting to taste). 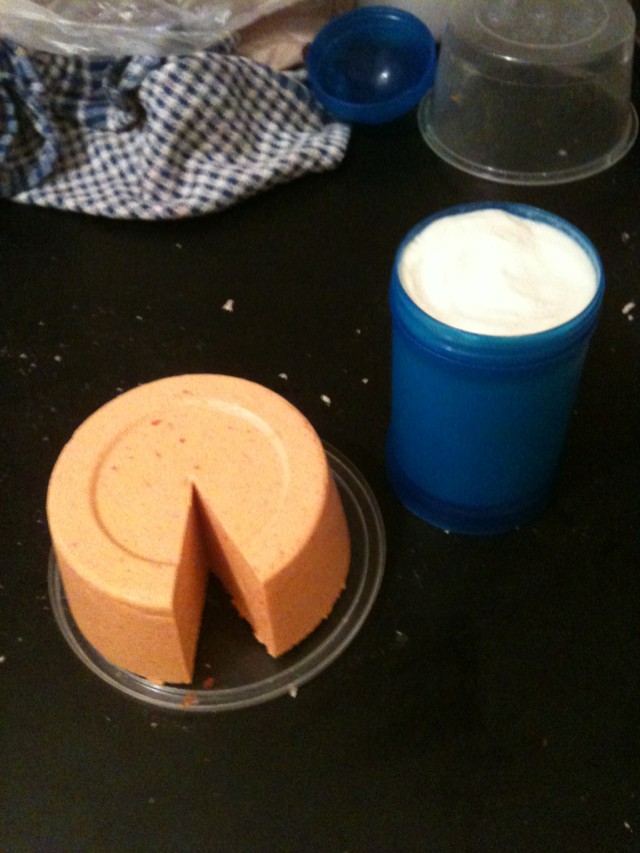 Piled bean mix on to my chips, added a few slices of the 'cheese' and microwaved for a few mins to melt, then finished off with a decent blob of sour cream. No avocado sadly but end result was still delish :D 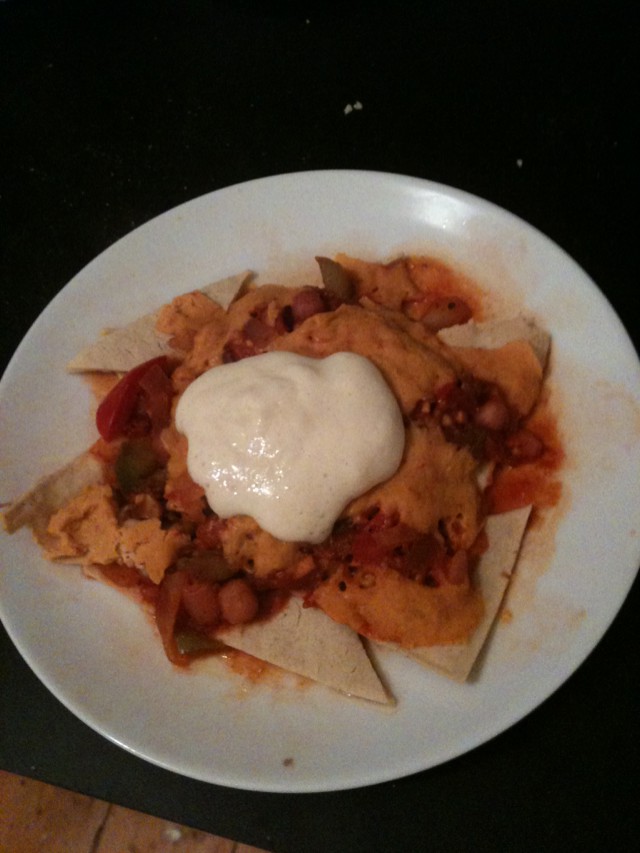 The 'cheese' melts which makes me happy. A slightly airy & grainy texture, not quite the real thing, but it was my first attempt at homemade vegan cheese and it certainly fills that cheesy hole for me. The sour cream was also good, slightly nutty & went well with the bean mix.
I am transitioning from vegetarian to vegan so the sour cream & cheese subs are great for me. Vegan cheese in the shops is like gold dust where I live; I've only found it at two health food stores which aren't overly easy for me to get to! So knowing I can make a reasonable imitation is great! I think I will tweak the cheese recipe a bit next time, more fat perhaps (tahini, maybe some oil?), and less agar, maybe more nutritional yeast and more smoked paprika, too. If anyone has a fab recipe or general tips please share! :)